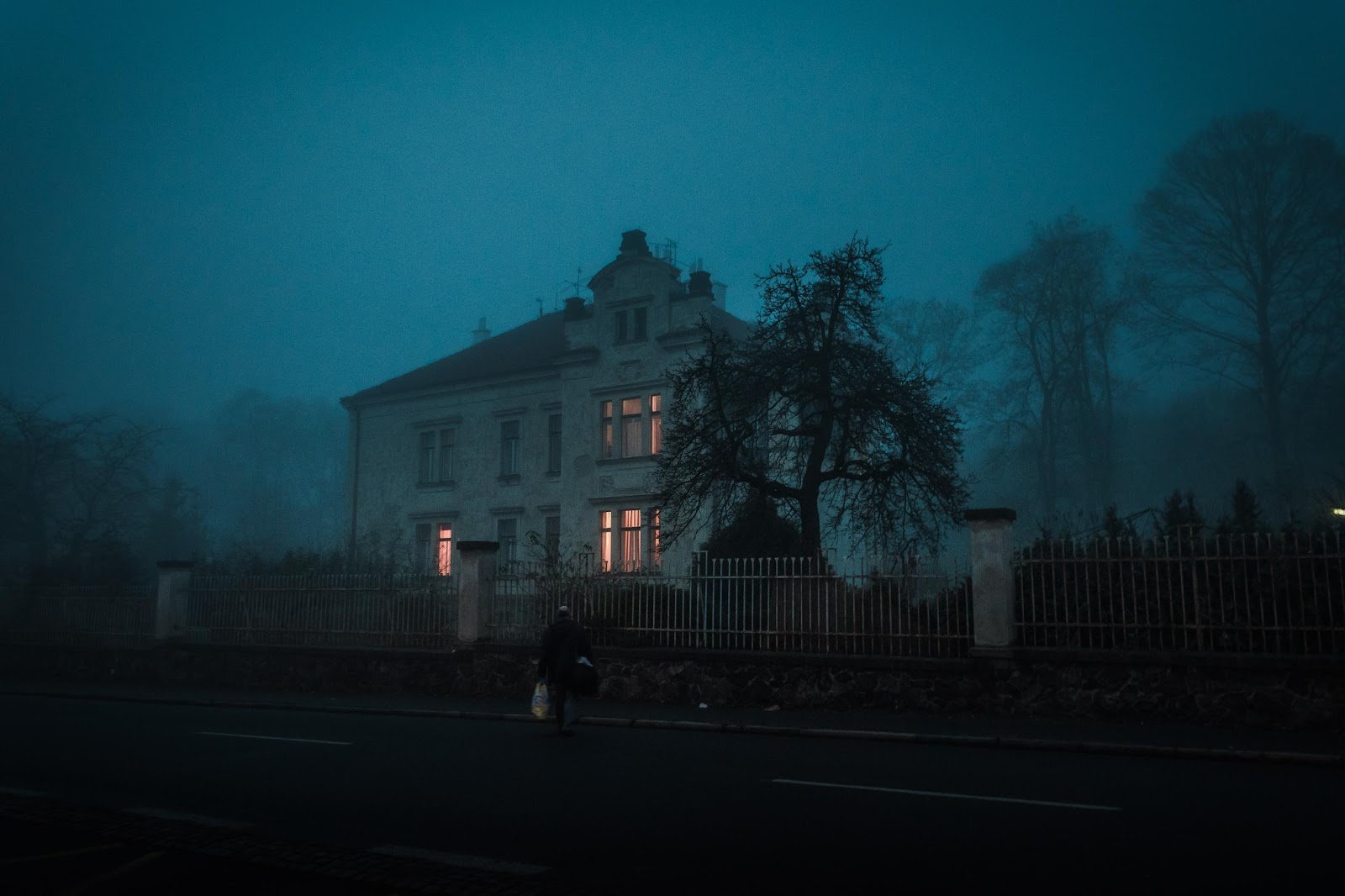 Wait… is that a shadow under the stairs?

If the thought of an eerie sight terrifies you, then the haunted houses for sale you’ll find in the following lines aren’t for you. However, if you’re the adventurous type who’s not scared of paranormal environments and events, you might want to get your seat belts tightened.

A famous horror film’s plot relays the story of unsuspecting persons who bought a haunted property thinking they got a great deal. But all that doesn’t happen alone in horror films and novels. Many homes today have increased in value and fame for being in-dwelt by other-worldly beings. Well, don’t get scared yet – the stories have just begun.

While not everyone believes ghosts exist, the famed structures have become tourist attractions for all classes of persons. Other persons are curious enough to visit these places for architectural and business purposes. Not only have some of these haunted homes inspired Hollywood scripts, but some have also been literally featured on vlogs, entertaining paranormal story-lovers.

However, while the stories about haunted homes may be terrifying, living in one is something else altogether. Here are stories about some haunted houses for sale worldwide, plus few recently sold ones. Read to the end!

If you’ve watched horror tales like ‘The Conjuring’ and ‘The Amityville Horror,’ then, like some people, living in a haunted house may not be an excellent idea for you. Conversely, there’s a demography of people who wouldn’t mind paying for a haunted home.

Millennials are 13 times more likely to purchase a strange property, with many admitting they’d pay a premium to live in one. Another study reports that one in four paranormal homes’ visitors were between ages 18 and 24.

Millennials and others who don’t mind living in a ghost-haunted property have a goldmine to view here. The following properties are previous murder houses or former tragedy scenes that have continued to host other-worldly beings since their original owners died:

A former schoolhouse built in 1897, the Kate Shepard House is on the US National Register of Historic Places. This home encompasses 4,200 square feet with six bedrooms, five bathrooms, and generous space to accommodate guests. The property retains much of the antique furniture of a regal living room, with sash windows and carved wooden hearths.

Wendy James, who owned the home for 18 years, reported that a spectral visitor comes around the haunted house. Some visitors have asked questions about a little girl running around the home, even though no such girl lives in the home.

Local legend says that the ghost might be a former schoolhouse student. Some other postulation says that the spirit belongs to Kate’s sister, who had died in the home. However, there were no negative tales about the activities of these bizarre sights. The Kate Shepard House, as at the last valuation, goes for $995k.

This property once housed the famous English scientist Michael Faraday and looked over the home of King Henry VIII. Although attractive, rumors say that the property hosts the ghosts of two of the infamous King’s unfortunate wives. The house held five bedrooms, two bathrooms, and three reception rooms, all having features of a refined antiquity home, and goes for $2.5m and is on sale with Dexters. 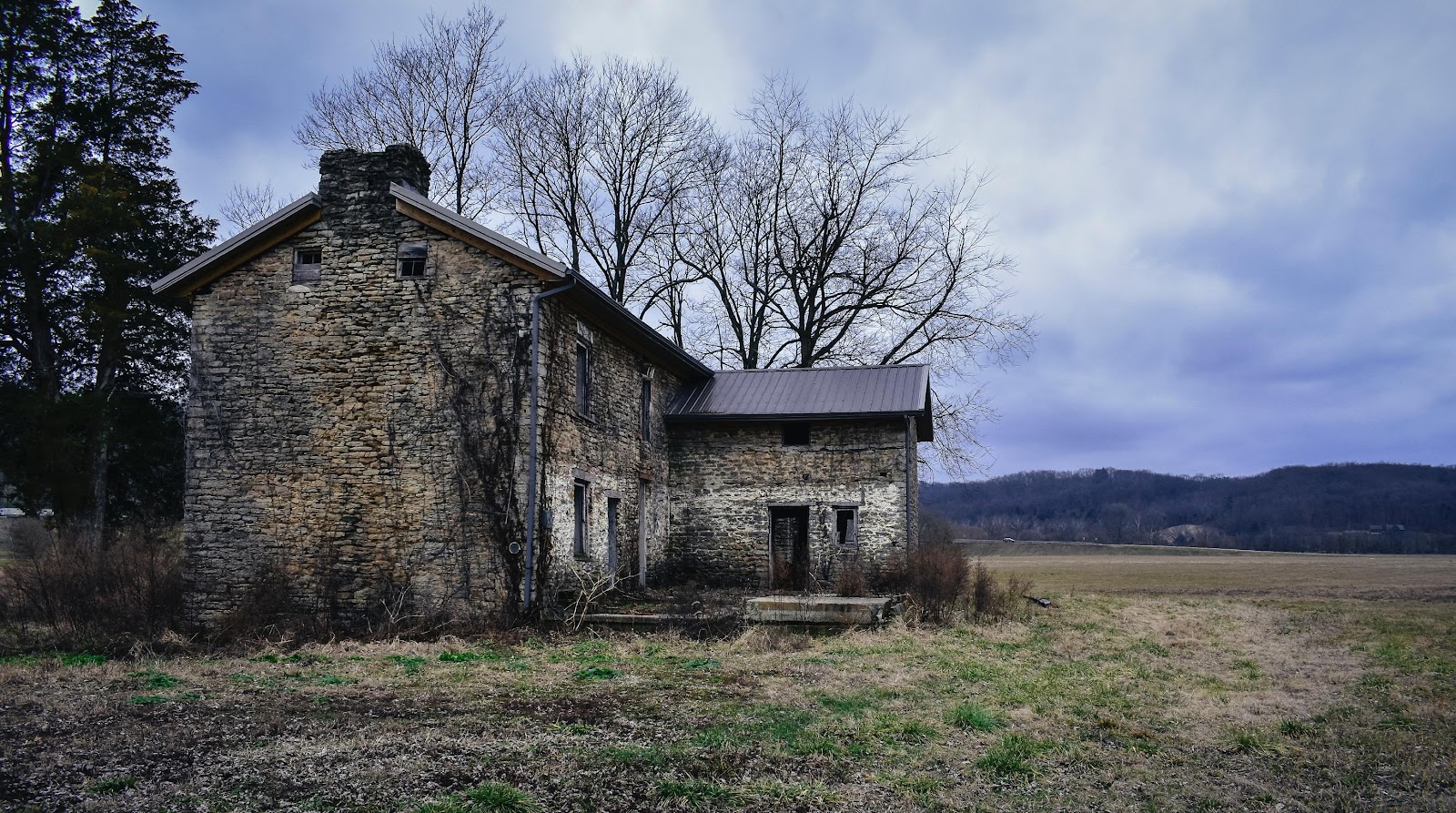 One of the most renowned spectacular homes in the United Kingdom, the Earlshall Castle boasts ample space for a large family, eight grand reception rooms, three cottages, and even its woodland and beautiful walls surrounding the gardens. Ghost-lovers and people who aren’t scared of things that hover at night could get this property to their name with roughly $9.8m in hand.

The Amityville Horror House is the site of a mass murder that claimed six lives. In 1974, a 23-year-old Ronald J. DeFeo Jr. reportedly shot his entire family – two parents and four siblings – in their sleep.

About a year later, another family bought the property at a discounted $80k due to the property’s eerie reputation. However, they didn’t spend more than four weeks on the property due to paranormal happenings like eerie odors, cold spots across the home, and green slime oozing out of walls and keyholes.

George Lutz, the stepfather in the Lutz family, reported waking up at 3:15 am nightly, about the same time DeFeo executed the murders. Worst of all – the family said an unseen force lifted the wife and their two sons off their beds.

The reportedly haunted home went through renovations and an address change to keep ghost haunters away from the property. This famous haunted house bore a price tag of $1.15m in 2010 but later sold for $950k. A 2017 resale of one of America’s most haunted places went for $605k. Today, Zillow estimates the property for approximately $1m.

The Charming Forge Mansion in Womelsdorf, PA, with seven bedrooms, four bathrooms, and ancient Colonial-era features and woodwork, was built in 1784 and restored 210 years later. Paranormal experiences in this historic home include stories about a crying woman in the hallways and several noises similar to German war prisoners of the American Revolution era.

Some persons have also reported ghostly encounters with a male figure in the mansion’s backyard. The Charming Forge Mansion in Womelsdorf, which once bore a price tag of $2.5m in 2009, sold for $650k ten years later, according to a report on Zillow.

Located at 138 E. Fulton St, Canton, MS, the beautifully-renovated Priestley home has an intriguingly weird history. Dr. James Priestley built the facility in 1852 and resided in the house with his wife until their demise. There have reportedly been ghost sightings of the doctor and his spouse on the grand staircase, a sleeping porch, and four other rooms in the property.

The home, which underwent several renovations, now holds well-designed sections, including four bedrooms, a music room, office, library, parlor, formal dining room, and a sleeping porch. Part of the most renowned paranormal happenings on the property includes the sightings of a ghostly woman, a self-playing piano, and hot spots’ detections in the room where Mrs. Priestley died.

During an investigation of the home, paranormal experts reported that their equipment became badly affected during their visit. Once listed at a selling price of $1.15m, the 5,252-square-foot home sells for $899k and is up for grabs for anyone not scared of paranormal events. 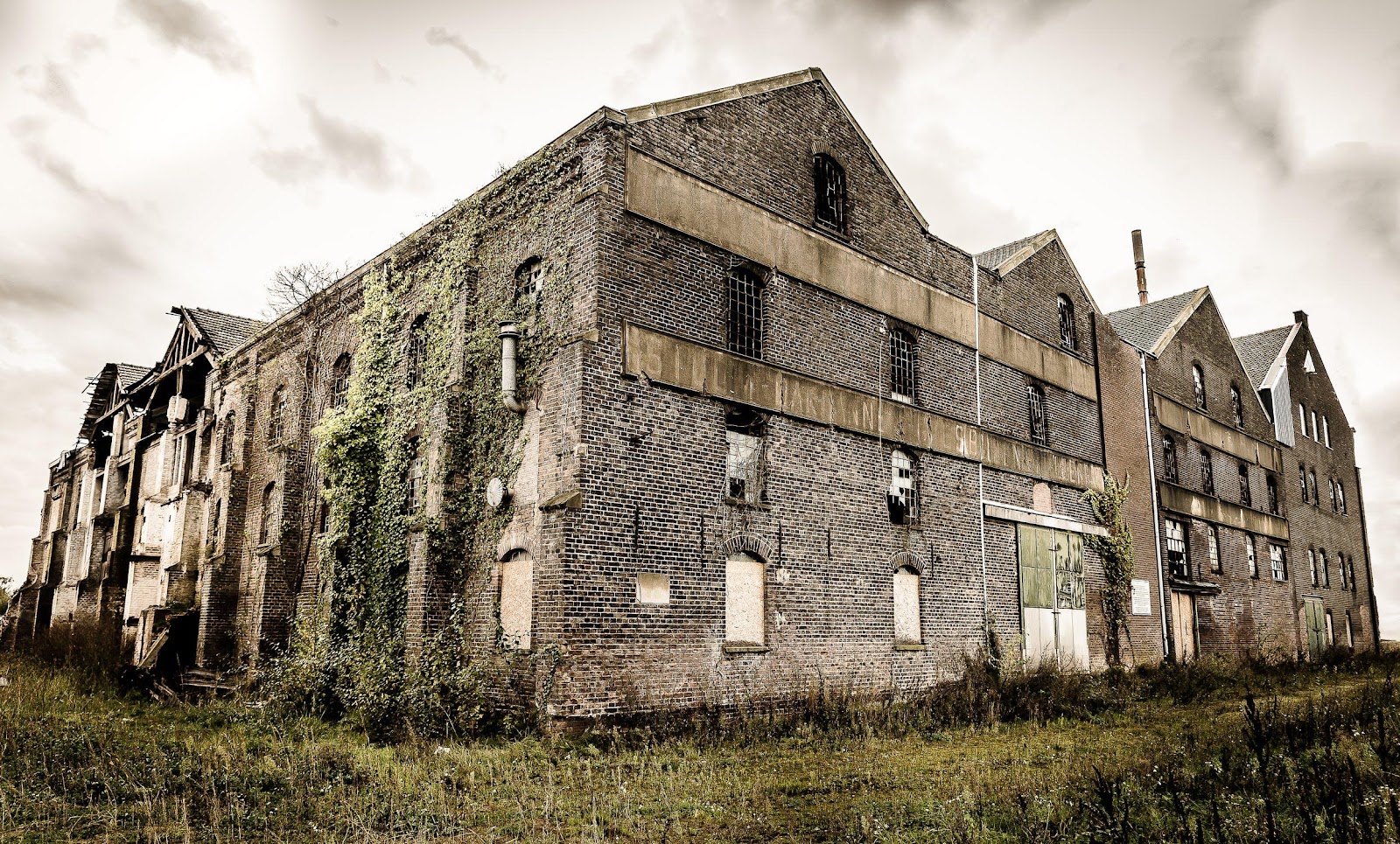 The Franklin Castle in Cleveland, Ohio, bears a Victorian-style design that dates back to the 1880s and is built by banker Hannes Tiedemann. Six of Tiedemann’s close relatives – his mother, wife, and four children – died in the home.

After Tiedemann died in 1908, the property became a cultural center for the German Socialist Party. However, stories went public of eerie activities on the property. Visitors reported strange events like crying babies, mysterious electrical charges, and a mysterious woman emerging from black steam in the 1960s.

Moreover, people have reported seeing ghostly figures of Tiedemann’s illegitimate daughter, whom rumors say Tiedemann hanged; and of his mistress, who Tiedemann allegedly murdered with an ax. The home once sold for close to $1 million in early 1984. However, raging fires damaged the property and contributed to a price drop in the facility. The home sold for $260k in 2011.

One of the most famous terrifying places in the US, this gigantic structure in New Orleans, Louisiana, hosts seven bathrooms, six bedrooms, and a horrific tale. The property’s initial owners built the mansion for royal visitors from France.

An official report from New Orleans Historical reports that Madame Delphine LaLaurie moved into the building in 1832. LaLaurie reportedly hosted extravagant parties in the home, making her earn a place among the New Orleans elite. However, there were rumors and tales that LaLaurie maltreated her slaves during her stay in the mansion.

In 1834, a fire broke out at the residence, and firefighters entered the building to extinguish the flames. To their surprise, the firefighters reportedly discovered badly-mutilated slaves that served prison terms within the home. The report added that an angry mob invaded the property and destroyed it as much as possible. Madame LaLaurie escaped to France, where she spent the rest of her life.

Many New Orleans ghost tours include the property, bearing speculations about the souls of enslaved people maltreated in the home. However, the property is a private residence and doesn’t welcome ghost-hunters anymore. The property bore a $2.1m price tag in 2010, but a 2020 Zillow valuation of the property estimates the home’s value at $910k.

Built in 1878, The Pillars Estate in Albion, New York State, has six bedrooms, six bathrooms, and many ancient features that remind you of another era. The home staff members have reportedly heard footsteps behind them while they went up the stairs. One caregiver for the historic property reported hearing the piano playing when there was no one in the room.

Perhaps the most dreadful of the ghost stories was the sighting of a ghostly woman in a white dress by the same witness in different areas of the home. The Pillars Estate went for a $1 million price in 2015 but dipped to $450k as of 2020. 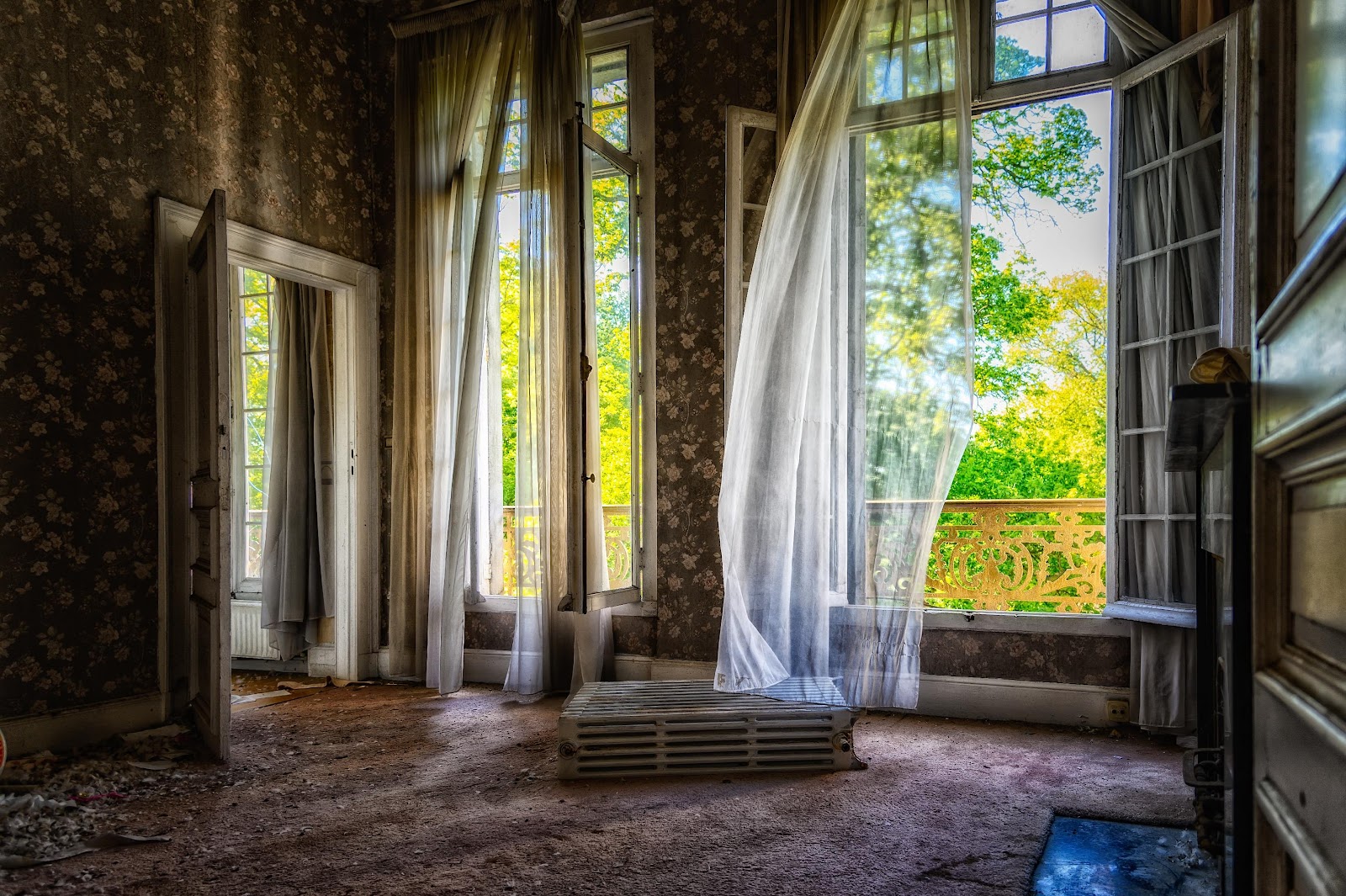 Dating back to the 1900s, this residence in Atchison, a small town in Kansas, has long held an eerie reputation. The property once served as a private medical facility. Local legend says the clinic’s doctor received a young girl who had appendicitis, and the doctor started operating on the 6-year-old girl before the anesthesia took full effect.

The girl died on the surgical table, and her spirit reportedly haunts the property. Some of the eerie events in the haunted home include visitors seeing strange scratches, moving objects, inexplicable fires, and cold spots in what legend says was the operating room.

The property’s price went to $1 million in early 2016, although it lost about 50% of its selling price by the year’s third quarter. A Zillow listing on the property reported that the home once hosted visitors for $400 a night in a bid to encourage potential buyers to consider renting the property to lovers of paranormal activities.

The three-bedroom residence in Atchison, Kansas, left the market in November 2017, and has received investigations by multiple ghost hunters since then. The visits include self-guided tours or overnight stays, hoping to tap a real ghost. Talk about a great passive income source for a $500k investment for the owner.

Also called Squire House, the ghost-haunted property called the Highland Cottage has a seriously spooky history. Home to different people since its building in 1872, the cottage’s mystery dates back to 1905 when a physician bought it. Dr. Amos Osborne Squire, the 1905 buyer, had been the chief physician at the famous Sing Sing prison in Ossining.

Reports say that Dr. Squire had first-hand sights of over 135 executions while working at the confinement. About seven years into his abode at the Highland Cottage, Squire turned the property into a private psychiatric clinic. Traditional legend attributes the mysterious events in the property to the mental health clinic the property hosted. Highland Cottage’s owners once tagged a $1,25 million price for the home. However, the property went for $925,000 in 2018.

All these haunted houses for sale have different reputations for hosting mysterious happenings – some positive, some negative, and others plain neutral.

Current owners utilize the properties for historical, business, or architectural reasons. While many of the houses have once listed above $1 million, market indices and other factors such as buyers terrified of the horror stories have reduced the prices to more affordable offerings.